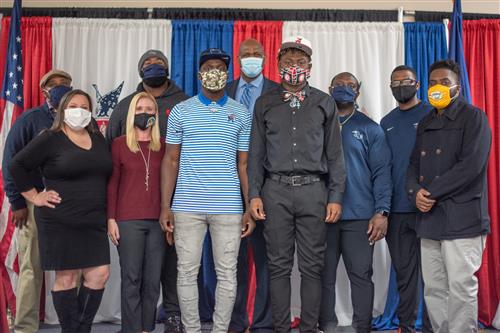 Signing with the University of Memphis, the Monster of Marrero, Andrew Jones.
Andrew Jones played a role on both offense and defense for the Patriots. On the defensive side of the ball he tallied an astounding 211 tackles, 24 sacks, 98 tackles for lost, four forced fumbles, two fumble recoveries, one interception and two defensive scores. He made his offensive debut against West Jefferson and scored the go-ahead touchdown with minutes remaining in the game to defeat our long time Westbank rival. He continued to have a solid offensive presence and racked up 894 rushing yards scoring 10 touchdowns. Because of his outstanding play he is a two-time member of the 8-5A All-District team. Andrew’s great speed, athleticism and toughness made him a leader of the field. 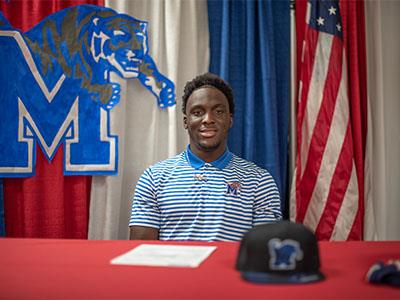 Signing with the Crimson Tide of Alabama, Mr. Patriot, Kaine Williams.
Kaine Williams has been a staple for the Patriot’s defense since he arrived at John Ehret his freshman year. His dominance in the Patriot secondary began his Sophomore season at Destrehan with a one-on-one stop of then running back John Emory. He continued to grow as a defensive force for the Patriots and became one of the top secondary players in the state. This season he tallied 51 ½ tackles, three sacks, 10 tackles for lost, seven pass break-ups, three interceptions, three forced fumble and recoveries and two defensive touchdowns. He has been named to the 8-5A All-District team for three consecutive years and caught the eye of the SEC. 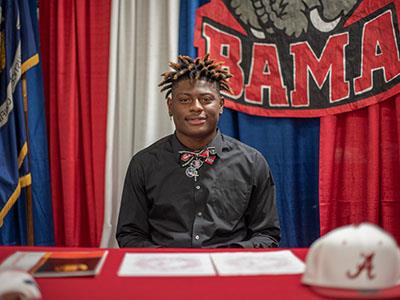